The Fountainhead in Miami 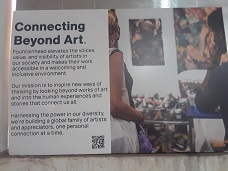 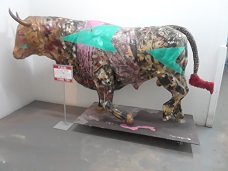 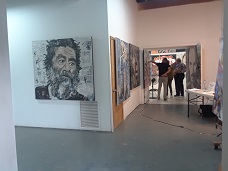 Most of us remember reading The Fountainhead in HS.

For me it was required reading.  The 1943 AYN RAND a Russian-American author, wrote a novel entitled The Fountainhead.  The novel’s protagonist Howard Roark was a young architect who battled against conventional standards and refused to compromise with an architectural establishment.  For him it was individualism vs. collectivism within the soul.

became instrumental in developing Miami’s own Fountainhead, and as they say… the rest is history.

We were originally introduced to the Fountainhead Residency and Studios by a Chilean artist and friend of ours, Carla Fache.  She rented an artist’s studio at the Fountainhead in NW Miami along with dozens of other artists.  She invited us to an artist’s open house more than a dozen years ago and we discovered a building on a quiet NW Miami Street that was bustling with creativity.

Recently, (May, 2022), there was another open house that we heard about on W-LRN.  For us it was the perfect way to reconnect with this hidden treasure.  Upon arrival we found dynamic Kathryn making the rounds inside many of the artist’s studios while greeting visiting guests throughout the Fountainhead.  Sadly, we were told that the Fountainhead building will (or has already), be sold in about a year in a half, making space for a new structure.  Another one bites the dust.

The artists at Fountainhead Studios will continue to invite visitors to come by and view (and purchase) their creative spaces and amazing artistic endeavors.

According to their website, www.fountainheadresidences.com the artists will have another ‘open studios’ on June 24, 2022. Easy ample parking. Worth the drive there.