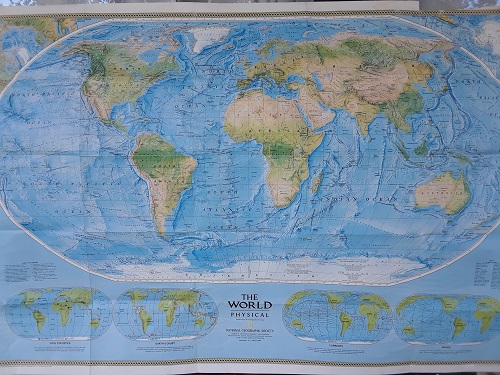 I love their reporters, the subject matter and their creative presentations. Expect weekly, programing that shares unlikely paths towards curiosity and hopefully knowledge.  On this Memorial Day show, well you can guess, priority was given towards the women and men who have in the past and present served our country.  Then as expected…the rest of the unexpected.

First story was all about maps and locations. I’ve been collecting maps since I was in Jr. High School.  Maybe because my father was an engineer on numerous ships and was always traveling. Maybe because my grandmother was born in Chile or maybe because the rest of my family members were born in France. Different parts of the globe always interested me.

My father used maps and believe-it-or-not, also used a sextant which I still own however don’t know how to use. My beloved mother could not fathom directions, even eventually in Miami, Florida where the streets are mostly numerical and every street sign tells you, you are either in the N, E, S, or W.  Both my grandmothers just asked strangers for directions.  Me, I’m guided by the sun and stars.

The first accurate world map that I viewed, was in a storefront in Paris.  I observed that the USA was not situated in the middle of the map like on most of our American school maps and China and Russia were not hanging off the east and west edges of the map. Interesting.

HistoryMiami Museum (www.historymiami.org), always dedicates a few glorious exhibitions to maps and from experience I can assure you that those shows are well attended. I guess GPS is a modern plus and I’m told, mostly accurate. Map quest is another modern-day way to get from here to there, however since architectural constructions often change street locations, that too is approximate.  Let’s face it, maps are works of art, guides to the geographical past as well as historical references to the political, economical and environmental changes on our planet. In the meantime GPS and other devices will get most of us around, except me, I’ll be looking up.

The History Museum held a virtual map fair this past February, 2021. More next year.  www.historymiami.org