The 67th Beaux Arts Festival on the U of M Grounds 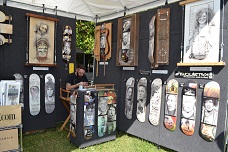 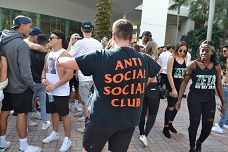 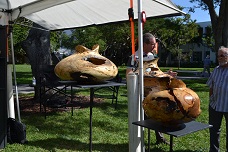 The Beaux Art Festival of Art is considered one of the premier volunteer organized and operated art festivals in the United States” stated  Amy Bales, President of the Festival.

She doesn’t have to convince us. We think it’s one of the most interesting shows anywhere.

It takes place on the grounds of the University of Miami, by a stream filled with wildlife, adjacent to the Lowe Art Museum which is open to the public for free during the two day extraordinary event.

Tens of thousands of art lovers meander on the grassy terrain, enjoying the juried artists’ creative works and then sit and enjoy  live music while munching on numerous  food vendor’s ethic preparations which this year included Gyros and Arepas, etc.

The first Beaux Arts Festival was originally called the Clothesline Sale. Since its inception, and through the sustained efforts of the volunteers, the show has evolved into an annual event that showcases the works of over 200 artists in the categories of  3D sculpture,  ceramics, glass, graphics and drawing, jewelry, mixed media, oil and acrylic, photography, watercolor and wood.  Enjoy some of my photographic highlights of this year’s show.