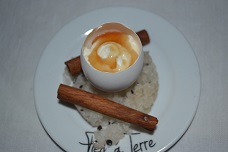 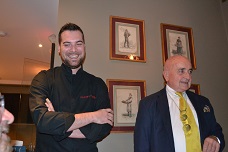 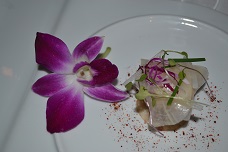 Folks inevitably ask me what my favorite restaurants are. I’ve got a few.

At the top of my list is Pied a Terre located in the Cadet Hotel in South Beach.  It’s one of those hidden gems which offer patrons a perfect wait staff, a soft and quiet environment complete with a superb wine list and preparations which are creative and beautifully presented.  You probably won’t find   your usual South Beach crowd there.   Instead this restaurant caters to a more conservative clientele who appreciate Old World elegance and romance.

Chef Florient Courriel is enchanting his guests with a new tasting menu that is formidable. Only 28 years old, however don’t let his age fool you.  His mastery of Mediterranean-French Contemporary cuisine fascinated our table of four appreciative foodies. Chef Courriel has worked and picked up a number of cooking secrets in Arles, France, Moscow, Hong Kong and he is now fusing his international experiences, and dazzling diners in Miami.

Monsieur Patrick Gruest, GM and bon vivant brought the talented Chef to his restaurant and gave him Carte Blanche.  We were impressed.

We started with a flute of Champagne accompanied by a softly boiled egg presented in a half shell minus the albumen.  Instead, the yolk was lightly topped with a drop of maple syrup, some herbs and the shell was carefully posed on a bed of Sea Salt.  Next came a spoon full of sea urchin with lobster jelly and caviar, steamed dry overnight and combined with layered cauliflower.  It was served in a Martini glass. We were already in awe when the next course made its way to the table. The lobster mixture was enveloped in what seemed like Mekong rice paper ravioli. It was light and so flavorful. The ‘soup’ contained a table spoon of fois gras poached in a tasty bouillon and topped with thin slices of radishes. We continued with a tenderized grilled octopus surrounded by tiny bits of pickled onion.  Thankfully the octopus was not at all chewy which was appreciated.  Normally this would have been more than enough for any tasting however Chef Florian wanted us to try a small portion of the steamed pigeon wrapped in a cabbage leaf and, cooked in a reduction sauce. Sadly I couldn’t finish the juicy fresh fruits for dessert.

In my opinion this young and talented man is on his way to becoming a Michelin star.   You can taste his creative preparations at Pied a Terre, but hurry.   He’ll only be in town for a short time.