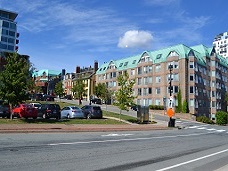 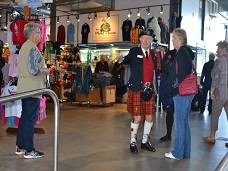 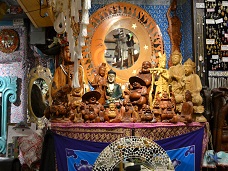 The ship didn’t go directly from Quebec City to Halifax.  Instead we had two small ports to visit.

This might sound skimpy however; Saguenay, Canada and Sydney, Nova Scotia were disappointing.  Don’t get me wrong.  These are Christmas card, small towns with lovely people, local handicrafts, a church or two, a couple of stores, etc., really not much to see or better known as a ‘ship day’.

Saguenay did have a very small ‘warehouse’ dedicated to ‘stuff’.  Almost everything in the ‘museum’ was ancient ‘stuff’ that I have in my garage.   Sydney’s claim to fame was the now pretty much defunct steel and coal industry.  Charming, but not really for tourists.

Halifax was a revelation.  Beautiful, modern with a city town feel.  There is so much to experience and tons of creative cultural events. Here’s my secret to finding the best spots to visit.  I aim for a store.  In this case ‘Dollar-rama’.  Yessss J the dollar store.  Then it’s all about getting off of the ship and asking for directions.  Inevitably, people will direct you through streets that they use.  Let’s face it, when you live in a city you know how to navigate it.

On our way to ‘Dollar-rama’ we discovered the best Chinese restaurant ever.  We were the only non-Asian diners.  It was a self-serve, all you can eat, select and cook your own food in two very hot broths. Everyone spoke Chinese. I was in heaven.

Next on the path to you know where, we found a Cathedral, climbed the Citadel, strolled into the Victorian Public Gardens, discovered several ‘Greenwich Village’ type shops, and admired adventurous architecture.  Oh and yes, we did find ‘Dollar-rama”.   I wouldn’t mind living there however; they do endure some very cold winters.  So we’ll stay in Miami for now.

Tomorrow we’ll be heading towards our final destinations… New York and New Jersey.