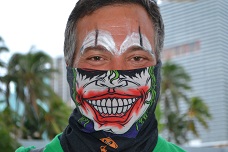 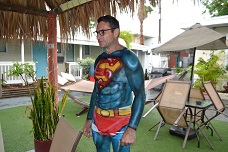 It’s Monday morning.  I’m holding up a map of Key West and remembering the fantastic weekend my friends and I enjoyed.

Three days ago, meteorologists predicted a very rainy Key West weekend.   They were wrong.  While Miami soaked in a Saturday downfall, KW was bathing in perfect weather for Fantasy Fest.

We started out with 13 friends.  Seven of us came back on the GO Bus.  I don’t know what happened to the rest of them.  Maybe they’re still in KW?  I’ve heard of Fantasy Fest for years.  Whatever has been said about this yearly event is true.  It doesn’t disappoint.

We had no hotel reservations and yet one of us managed to find a very cheap ($49.00) motel room while we were on the bus heading through the islands.  The taxi that took us to our motel cost as much as the room, but it was worth it.  So on a sunny, cool Saturday we headed towards Duval Street.

Key West, better known as the Conch Republic is unlike any other city that I’ve ever visited.  People seem prepared to accept ridiculousness with gusto. Especially during the 10 days of Fantasy Fest. There is an easiness that overwhelms residents and quickly spreads to the tourists.   Barely one month after Hurricane Irma ravaged the Keys, KW is pristine and in good spirits.

I was dressed as a Media expert.  The brim of my hat stated that I was PRESS.  On the other side of the brim, the pass stated FAKE NEWS.   My friend Victor was dressed as King MIDAS. Everything he touched turned to gold.  Strolling down Duval was joyful.  The storefronts are filled with art, clothing and tourists shops. After about an hour of meandering we ended up at a patio restaurant called BAGATELLE where menu items were very affordable and the street view was eye popping.  By the end of our tasty lunch creative costumes started to appear everywhere.  The trend this year was body painting.  That translates into amazing artists who paint people’s bodies so that it looks like they’re wearing clothing but…they’re not.  Some people shouldn’t be naked but the overall attitude of ‘Who Cares’ won out so tons of cheerful souls were parading around in their birthday suits. Put Fantasy Fest on your Bucket list.  It’s so worth the drive there. Check out my shots. 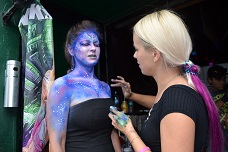 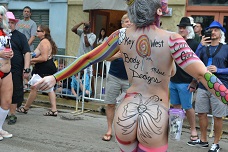